Theatrical video installation. A series of works about Laika, the famous soviet dog who became the first earthling to venture into outer space.
Around a large table covered in white books by anonymous authors, Laika holds a digital seance, invoking the spirits of people who, like herself, have drowned in the endless wave of the future.
The perilous journey into the heart of the present moment is aided by video projections, musical toys and a mechanical time machine.

the costume designed to give transparency look with using  Tyvek -a paper-faric-high-density polyethylene fiber. The material is very strong; it is difficult to tear and  water cant pass through it . It has very lightness in its  feeling of  “stand up” wrinkled , and of wrapping a package (it used as envelope) gives the feeling and add a visual layer to the conceptual idea of Laike “has been sent”. 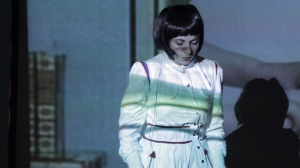